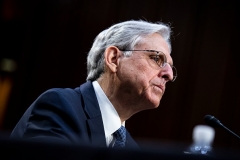 (CNSNews.com) – Attorney General Merrick Garland this week took two steps to “end gun violence,” as he put it. He issued model legislation on red flag laws for the states to consider; and he proposed a regulation controlling accessories that are said to convert pistols into short-barreled rifles.

“I hope you will consider putting out a model proposal for local jurisdictions that are interested (in) permit to purchase, as I think you’re suggesting you’re going to do for the red flag laws. Is that something that you would consider doing?” Van Hollen asked Garland.

“Definitely,” Garland said. “We did put out the–the red flag laws just this week, or earlier this week. But that’s definitely something to consider,” Garland said, referring to model legislation on gun licensing.

Van Hollen told Garland that he has introduced a “Handgun Purchaser Licensing Act.” “We’d love to work with you to see if that’s something you think would be a good model going forward,” Van Hollen said.

Van Hollen’s bill, first introduced in 2015, would create a federal grant program to incentivize state and local governments to pass laws requiring individuals to obtain a license before purchasing a handgun.

Maryland is one of nine states that already have such a law (the others are Connecticut, Hawaii, Iowa, Illinois, Massachusetts, New Jersey, New York, North Carolina and the District of Columbia). Van Hollen and other gun control advocates want all the states to require gun licensing.

Van Hollen’s legislation would require gun buyers to be at least 21 years old and legally eligible to own a gun. A would-be handgun purchaser would have to apply for the license at a law enforcement agency within the state; submit to a background investigation and criminal history check; and submit fingerprints and photographs with their application.

On Monday, June 7, the Justice Department issued a notice of proposed rulemaking that says legal restrictions on short-barreled rifles also apply to pistols that are equipped with stabilizing braces and intended to be fired from the shoulder.

According to the DOJ announcement:

The National Firearms Act imposes heightened regulations on short-barreled rifles because they are easily concealable, can cause great damage, and are more likely to be used to commit crimes. But companies now sell accessories that make it easy for people to convert pistols into these more dangerous weapons without going through the statute’s background check and registration requirements. These requirements are important public safety measures because they regulate the transfer of these dangerous weapons and help ensure they do not end up in the wrong hands. The proposed rule would clarify when these attached accessories convert pistols into weapons covered by these heightened regulations.

The public will have 90 days to submit comments on the proposed regulation.

On the same day, the Justice Department published model legislation to help states craft their own “extreme risk protection order” laws, sometimes called “red flag” laws, which remove guns from people who exhibit “warning signs,” but who have not done anything wrong.

By allowing family members or law enforcement to intervene and to petition for these orders before warning signs turn into tragedy, “extreme risk protection orders” can save lives. They are also an evidence-based approach to the problem. The model legislation, developed after consultation with a broad range of stakeholders, provides a framework that will help more states enact these sensible laws.