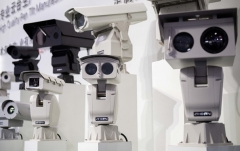 AI security cameras using facial recognition technology are displayed at an exhibition in Beijing in 2018. (Photo by Nicolas Asfouri/AFP via Getty Images)

(CNSNews.com) – The Chinese government’s growing demand for Artificial Intelligence (AI) has triggered a swell in tech companies moving to corner the market. Its surveillance – or more bluntly, spying – capabilities are not only on track to surpass American technology in the next five to ten years, but are also proving to be a national security threat for the United States.

A report released by the U.S. National Security Commission on Artificial Intelligence (NSCAI) earlier this month underscored that the “magnitude of the technological opportunity coincides with a moment of strategic vulnerability.”

Around the same time, the Chinese Communist Party (CCP) leadership divulged its own plans to conquer the tech contest, ramping up its development planning and bolstering budgets for everything from AI and quantum computing to voice recognition, neuroscience and biotechnology research by more than seven percent annually until at least 2025.

“The Chinese government can collect Chinese people’s private information at will, as long as it is put under the national security umbrella,” explained Xiaoxu “Sean” Lin, a microbiologist and spokesperson for the Washington-based Falun Dafa Association. “Using the large data volume collected by surveillance systems and internet companies, combined with AI technology as the pillar, the CCP built the so-called scientific and technological society-stability-maintenance measures.”

The Oxford English Dictionary defines Artificial Intelligence as “the theory and development of computer systems able to perform tasks that normally require human intelligence, such as visual perception, speech recognition, decision-making, and translation between languages.”

Given that Beijing has a free hand in recording the data of its 1.3 billion citizens with no regard for data privacy, it also has a tactical advantage in manufacturing and improving the most accurate and sought-after AI in the world. Its uses in the military realm are also a growing cause for concern.

Cameras are pervasive in China. One quasi-political online post could result in a knock on the door within minutes. Every move, every face, every action is filed away in a database, ready for retrieval with the click of a mouse.

AI is a tool in the swelling CCP arsenal designed to keep its citizens in line. While much of the surveillance is focused on identifying and persecuting minority groups, such as Muslim Uyghurs or the Falun Gong meditation movement – outlawed as a “cult” by Beijing in 1999 – regular Chinese are also subject to such oppression, which dictates their social standing and ability to seek employment and education.

Referred to as the Integrated Joint Operations Platforms, the system was created by the state-owned military contracting firm China Electronics Technology Corporation. It can quickly produce names of people marked as “suspicious,” simply based on algorithms pertaining to travel patterns, phone apps, or key phrases used in private messenger services.

“China under President Xi has brought a laser-like focus to ensure that by 2030 it is the dominant AI power in the world,” said prominent defense analyst John Wood. “Billions of dollars and tens of thousands of China’s brightest minds are being deployed to ensure victory. Although the use of AI is seen as the centerpiece of China’s technological leap forward, it is its military application that is seen as the priority. Case in point, the use of drones and robots to swarm the battlefield and overwhelm the enemy.”

Beijing is already forging ahead to utilize its AI prowess to compete with the U.S. in the military domain. In this modern-day arms race, Beijing is racing against Washington to bring to life partially-autonomous military vehicles for land, sea and air operations, as well robots to participate in future combat missions.

“We’re outnumbered,” U.S. Air Force chief of staff Gen. Charles Brown told the 2021 Air Force Association Symposium this month, emphasizing that China will have amassed a greater number of war platforms than the U.S. in the coming years. Indeed, China’s PLA Navy is already bigger than the U.S. Navy, and continues to expand its fleet with nuclear-armed submarines and amphibious assault ships.

But the Pentagon’s headache doesn’t end there. It’s predicted China will continue to augment its Air Force and Army over the next four years, with everything from VT-5 light tanks and Z-10 helicopters to the potent Gongi-11 armed fighter drone.

However, defense experts contend that the U.S. can retain its critical edge in the AI and arms race. But it will require considerable investment, the NSCAI report cautions. The commission has proposed programs including the creation of a “Technology Competitiveness Council” in the White House, to be chaired by the vice president, as well as a steering committee on emerging technology at the Pentagon.

And according to Wood, time is of the essence.

“What is worrisome is both the U.S. academic and military position vis-a-vis the AI challenge posed by China,” he said. “We are reassured by academia that we are ahead, while at the very same time rely on Chinese students and fees to maintain our supposed lead. The DoD remains firmly in the conceptual and development phase, unlike China, which is already beginning to deploy some of its military AI applications.”

Biden: ‘We Have Never Fully Lived Up to’ Our Founding Idea