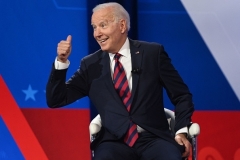 (CNSNews.com) – At a CNN town hall Tuesday night, President Joe Biden seemed to admit that Democrat policies — extended and expanded unemployment benefits and a moratorium on rents — may be contributing to a worker shortage in this country.

John, the owner of a restaurant group with 39 outlets, told President Biden he can’t find enough workers. The entire industry struggles to find employees, John said. He asked Biden how he plans to incentivize people to get back to work:

“One, if you notice, we kept you open. We spent billions of dollars to make sure restaurants could stay open. And a lot of people who now work as waiters, waitresses decided that they don’t want to do that anymore because there’s other opportunities at higher wages — because there’s a lot of openings now in jobs, and people are beginning to move. Beginning to move.”

Then Biden admitted “there’s some evidence” that a moratorium on rents and expanded unemployment benefits may have kept people from going back to work:

I think it really is a matter of people deciding now that they have opportunities to do other things, and there is a shortage of employees, people looking to make more money and to bargain. And so I think your business and the tourist business is really going to be in a bind for a little while.

And one of the things, we’re ending all those things that are the things keeping people from going back to work, et cetera.

It will be interesting to see what happens, but my gut tells me — my gut tells me that part of it relates to, you know, you can make a good salary as a waiter or waitress. One of my sister-in-laws is — of five sisters — makes a very good salary. She works in Atlantic City, that’s where she’s from, but it is — there’s a lot of people who are looking to change their occupation, I think, but I could be wrong.

The American Rescue Plan extended the extra $300/week in unemployment benefits through September 5, 2021. The federal eviction moratorium ends on July 31.

“Well, that was argued it was,” Biden said. “I don’t think it did much. But the point is, it’s argued that because extended unemployment benefits kept people — they’d rather stay home and not work than go to work.”

“You don’t think it did that?” Lemon asked.

“I see no evidence it had any serious impact on it. But you can argue it,” Biden said. “Let’s assume it did. It’s coming to an end. So it’s not like we’re in a situation where if that was it, and it ends, then we’re going to see — John’s going to have no problem.”