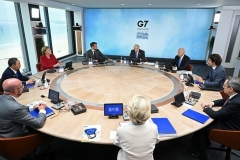 G7 leaders pose at the opening of their summit in Cornwall. (Photo by Leon Neal / Pool /AFP via Getty Images)

mm(CNSNews.com) – Leaders of the group of seven leading industrialized democracies called jointly Sunday for further investigation inside China into the origins of the coronavirus pandemic, adding new pressure on Beijing which has been refusing to cooperate.

President Biden told reporters in Cornwall the U.S. intelligence community was still uncertain whether the outbreak emerged as a result of a bat-animal interface, “or whether it was an experiment gone awry in a laboratory.”

In its end-of-summit communique, the G7 meeting in Cornwall, England called for “a timely, transparent, expert-led, and science-based WHO-convened phase 2 COVID-19 origins study including, as recommended by the experts’ report, in China.”

The so-called “phase 1” of the study into the origins of the outbreak ended earlier this year with a report that rejected the hypothesis that the virus could have leaked accidentally from a laboratory in Wuhan, the city where the disease was first identified in late 2019.

The team of international and Chinese experts convened by the World Health Organization (WHO) concluded that the so-called “lab-leak” theory was “extremely unlikely” and did not merit further investigation.

The team ascribed the most weight to the “natural origins” theory – the view that the outbreak began with the virus jumping from a bat or other animal, via an intermediate animal host, to humans.

Biden late last month instructed the intelligence agencies to investigate the origins of the virus, focusing on both the natural and lab-leak hypotheses, and report back to him in 90 days.

The new G7 push will add to pressure on both China and the WHO.

The U.S. remains the U.N. health agency’s biggest funder by far, as it has been since its founding in 1948. For the 2020-2021 biennium, the U.S. is providing 22 percent of WHO’s budget, and the G7 countries combined 51.6 percent. China, the world’s second-largest economy, accounts for 12 percent.

Bloomberg reported last week that a draft of a statement which the U.S. and E.U. are expected to adopt at that meeting will include a “call for progress on a transparent, evidence-based, and expert-led WHO-convened phase 2 study on the origins of COVID-19, that is free from interference.”

As the president flew to Europe last week, White House press secretary Jen Psaki was asked about the U.S.-E.U. document. She said it was important that the U.S. send a clear message to China, “in partnership with our European partners,” about the need to cooperate with a phase 2 investigation into the outbreak origins.

The Chinese government is highly sensitive about the lab-leak claims. Already touchy over criticism of its handling of the outbreak in its earlier stages, it has strongly rejected assertions that it could have resulted from an accident in one of its laboratories.

It says it has already cooperated fully with the investigation, and that any “phase 2” inquiry should look elsewhere – including in the United States, where officials have insinuated military bio-labs may have been responsible.

“Origin-tracing is the job to be done by scientists,” Chinese foreign ministry spokesperson Hua Chunying tweeted on Monday. “When intelligence community is involved, the nature is changed.”

“Given the record of the US intelligence regarding the Iraq War, what the US gov is doing and what will come out is a no-brainer,” she added.

In some of the strongest public criticism yet of the expert team’s phase 1 findings, Secretary of State Antony Blinken at the weekend called its report “highly deficient.”

“The leaders of the G7 have come together insisting that China cooperate with the so-called phase 2 study by the WHO, to really get to the bottom of what happened,” he said on Fox News Sunday.

“We need accountability, but we also need to understand what happened, why it happened, how it happened if we’re going to be able to put in place the necessary measures to prevent it from happening again – or at least to be in a better place to mitigate the next pandemic if we can’t fully prevent one.”

On CBS’s “Face the Nation,” Blinken said the phase 1 report “had real problems with it, not the least of which was China’s failure to cooperate.”

He said “the world,” not just the U.S., was insisting that China cooperate with a phase 2 investigation.

Concerns that the virus may have leaked from the Wuhan Institute of Virology (WIV) emerged in part because of its proximity to the initial outbreak epicenter, and because the lab specializes in studying coronaviruses in bats.

In 2013, WIV researchers collected a coronavirus (dubbed RaTG13) from bat feces in a Chinese cave, and early last year WIV scientists reported that that virus was found to share 96 percent genome sequence identity with the novel one that causes COVID-19.

Early this year then-Secretary of State Mike Pompeo said the U.S. government “has reason to believe” that several researchers at WIV had fallen ill in the fall of 2019 –before the outbreak was detected – “with symptoms consistent with both COVID-19 and common seasonal illnesses.”

Pompeo called for investigations into the reported illnesses, as well as into the WIV’s research on bat coronaviruses, including RaTG13.

A number of scientists, whether or not they think the natural origin theory may be the more likely, took issue with the expert team’s position of effectively writing off the laboratory accident possibility.