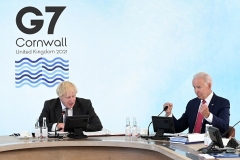 President Biden and British Prime Minister Boris Johnson at the G7 summit in Cornwall on Saturday. (Photo by Leon Neal/Pool/AFP via Getty Images)

(CNSNews.com) – President Biden arrived in Brussels on Sunday night for his second of three major intergovernmental summits where rallying democracies to counter China’s global agenda is emerging as a central theme.

At the just-concluded G7 summit in southwestern England, the world’s leading economies agreed to work on what Biden called “a democratic alternative to the Belt and Road Initiative,” a reference to China’s massive – and controversial – global infrastructure program.

Biden told reporters before leaving Cornwall that the “Build Back Better for the World” plan aims to create “a common strategy to deal with China non-market policies that undermine competition.”

“The point is that what’s happening is that China has this Belt and Road Initiative, and we think that there’s a much more equitable way to provide for the needs of countries around the world,” he said.

He described the idea – the G7 is calling it “B3W” – as a “values-driven, high-standard, transparent financing mechanism” to support infrastructure projects in the key areas of climate, health, digital technology and gender equality.

Biden referred to a more than “$40 trillion need that exists for infrastructure in the developing world,” and said much of the investment would be coming from the private sector.

In their summit communique G7 leaders said they recognize that the coronavirus pandemic has exacerbated “significant infrastructure needs across low and middle income countries.”

“Reflecting our shared values and shared vision, we will aim for a step change in our approach to infrastructure financing, notably on quality infrastructure and investment, to strengthen partnerships with developing countries and help meet their infrastructure need,” they said.

The partners agreed to set up a taskforce to “develop practical proposals” and report back to leaders in the fall.

Describing the G7 initiative in a Fox News Sunday appearance, Secretary of State Antony Blinken alluded to some of the West’s key concerns about Beijing’s  Belt and Road Initiative (BRI).

The aim with the G7 program, he said, would be to “do it in a way that’s a race to the top, not the bottom – in terms of the standards, in terms of respect for workers, for the environment, for privacy.”

“That’s a very powerful positive alternative to what China is doing with its so-called Belt and Road Initiative.”

Both Biden and Blinken underlined the theme that democracies can offer better solutions to the world’s problems than autocracies.

“I think we’re in a contest, not with China per se, but a contest with autocrats, autocratic governments around the world, as to whether or not democracies can compete with them in the rapidly changing 21st century,” Biden said.

“And I think how we act and whether we pull together as democracies is going to determine whether our grandkids look back 15 years from now and say, ‘Did they step up? Are democracies as relevant and as powerful as they have been?’”

National Security Advisor Jake Sullivan pushed back on reporting that the president had struggled to win support from G7 colleagues.

“It’s been framed up a bit as ‘Joe Biden walked in to convince everybody else on China,’” he told reporters as Air Force One flew to Brussels.

“And I think that’s not quite accurate. Each country has its set of concerns that it emphasizes vis-à-vis China. And what the president sought to do was bring all of that together into a common picture of what we need to do collectively as democracies to respond.”

Sullivan said there was “a broad view that China represents a significant challenge to the world’s democracies on a number of different dimensions, and that we need a common agenda that is mostly affirmative but also has elements where we are going to stand up and counter and compete.”

“And words like ‘counter’ and ‘compete’ were words coming out of the mouths of every leader in the room, not just Joe Biden.”

There was no immediate response from Beijing to the G7 proposal. But officials and state media have been referring dismissively to the grouping for days.

“With various agendas and interests, the sense of unity that the rich club is trying to hype up remains elusive,” the Chinese Communist Party paper China Daily opined on Sunday.

“The days when global decisions were dictated by a small group of countries are long gone,” a spokesman for the Chinese Embassy in London said a day earlier.

“That is sad,” Sullivan replied when asked about that criticism. “So, if their claim is that all of the other world’s largest economies count as small countries, then they have a massive problem of perspective.”

China featured several times in the communique, with references to the need for further investigation inside China into the origins of the coronavirus outbreak; trade practices; territorial disputes in the South and East China Seas; China-Taiwan tensions; and Beijing’s rights abuses in Xinjiang and crackdown on democracy in Hong Kong.

In contrast – as U.S. officials pointed out frequently – China was not mentioned at all in the communique of the previous G7 summit, two years ago.

Look ahead to Monday’s NATO summit, the next item on Biden’s itinerary, Sullivan said China would feature in that meeting’s communique too – “in a more robust way than we’ve ever seen before.”