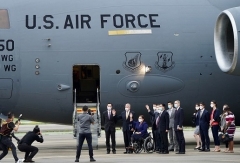 (CNSNews.com) – Days after three U.S. Senators made a brief stopover in Taiwan, their visit, and the fact they arrived on a U.S. Air Force transport plane, continues to draw criticism in China, where some are describing it as the biggest “provocation” since President Biden took office.

“The People’s Liberation Army will resolutely defeat any attempt by the secessionists to separate Taiwan region from China, and safeguard national unity and territorial integrity at all costs,” said Chinese defense ministry spokesman Senior Colonel Wu Qian in response to the visit.

“China must be and will be reunited,” declared Wu, alluding to Beijing’s stance that the island democracy is part of “one China.”

The PLA also announced that Chinese forces had carried out amphibious landing exercises on the mainland coast opposite Taiwan.

A PLA news website said the wargames “built a concrete basis for winning possible future battles against Taiwan secessionists, following the latest U.S. provocation by sending a military transport aircraft to the island of Taiwan.”

Wu described the use of a U.S. Air Force C-17 transporter for the senators’ visit as an “irresponsible and dangerous move,” a violation of U.N. resolutions and “the widely-recognized international consensus on one China.”

“China urges the United States to immediately stop any form of official exchanges or military contacts with Taiwan region, and refrain from sending any wrong signals to separatist elements advocating Taiwan independence.”

Foreign ministry spokesman Wang Wenbin also weighed in, saying China had lodged “solemn representations with the U.S. side” over the incident.

He said the U.S. “should avoid sending any wrong signal to Taiwan independence separatists and causing further damage to China-U.S. relations and peace and stability across the Taiwan Strait.”

The three senators, who also visited South Korea while in the region, confirmed U.S. plans to provide Taiwan with 750,000 COVID-19 vaccine doses, as part of a first tranche of 80 million vaccines the administration plans to share with other countries by the end of June. Taiwan is experiencing a surge in coronavirus infections.

Duckworth, a U.S. Army combat veteran, and Sullivan, a colonel in the U.S. Marine Corps Reserve, are both members of the Senate Armed Services Committee. They and Coons, a member of the Senate Foreign Relations Committee, are strong supporters of Taiwan in Congress.

During the visit, Sullivan recalled having been deployed more than 25 years ago in a U.S. Marine Corps amphibious task force in the Taiwan Strait, “during a very challenging and critical time for Taiwan’s democracy.”

“America’s presence then was in response to Chinese provocations on the eve of the presidential election in Taiwan and it demonstrated American commitment and resolve,” he said.

“Today’s bipartisan Senate delegation visit to Taiwan is yet another demonstration of that continued commitment to our friends and partners in this critical area of the world, as well as a reminder of how the United States’ presence over the past several decades has been instrumental in the development of security, prosperity and democracy throughout the Indo-Pacific region.”

China’s Xinhua state news agency said the visit was held “under the pretense of humanitarian concern.”

“There should be no official contact between Washington and the Taiwan authorities, not to mention exchanges involving military elements,” it said.

Global Times quoted Lu Xiang, a research fellow at the Chinese Academy of Social Sciences, as saying the visit was the most serious Taiwan-related “provocation” since Biden took office.

In an editorial on the senators’ visit, the CCP paper expressed skepticism about Taiwanese leaders’ desire to fight the coronavirus pandemic.

“Most of their thoughts are placed on how to show loyalty to the U.S., and how to be a loyal anti-Chinese mainland pawn of the U.S. to make Washington protect their safety,” it said.

Biden: Still Don’t Know Whether COVID Came from ‘a Bat Interfacing With Animals’ or ‘an Experiment Gone Awry’

DeSantis Says Partisan Media ‘Picking the Wrong People’ to Be Their Heroes: They ‘Elevated Fauci to Sainthood’

Sen. Bernie Sanders: ‘We Must End the Filibuster’