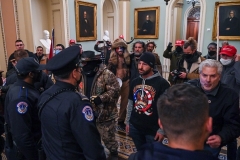 (CNSNews.com) – “I was personally sickened by the violence and destruction I witnessed” at the U.S. Capitol on January 6, Major General William Walker, the commanding general for the District of Columbia National Guard, told Congress on Wednesday.

But because of bureaucratic restrictions and delays up the chain of command, Walker said it took three hours and 19 minutes for guardsmen to finally respond to “a frantic call” for help from then-Capitol Police Chief Steven Sund.

Walker laid out the timeline in his opening statement, as follows:

— December 31, 2020: D.C. National Guard received written requests from D.C. Mayor Muriel Bowser and her director of Homeland Security/Emergency Management, Dr. Christopher Rodriguez, for the National Guard to help with traffic control and crowd management for planned demonstrations in D.C. on January 5 through January 6, 2021.

— January 1, 2021: Walker sent a letter to U.S. Army Secretary Ryan McCarthy requesting McCarthy’s approval for deployment. “I received that approval in a letter dated January 5,” for 320 guardsmen, including a 40-person “quick reaction force” to support the Metropolitan Police Department with traffic control near the Capitol.

But Walker said McCarthy’s January 5 letter placed restrictions on him: It “withheld…authority for me to employ a quick reaction force.” It also “required that a concept of operation be submitted to him before the employment of a quick reaction force.” Walker told Congress, “I found that requirement to be unusual, as was the requirement to seek approval to move guardsmen…from one traffic control point to another.”

— January 6, 1:30 p.m.: “We watched as the Metropolitan Police Department began to employ officers to support the Capitol Police. In doing so, the officers began to withdraw from the traffic control points that were jointly manned with District of Columbia guardsmen.”

Walker told Congress: “Chief Sund, his voice cracking with emotion, indicated that there was a dire emergency at the Capitol, and he requested the immediate assistance of as many available national guardsmen that I could muster.”

Immediately after Sund’s call, “I alerted the U.S. Army senior leadership of the request.”

“And we dialed in the senior leadership of the U.S. Army. And–and at that time, Chief Contee and Chief Sund passionately pleaded for District of Columbia National Guard to get to the Capitol with all deliberate speed.

“So the Army senior leaders did not think that it looked good,” (that) “it would be a good optic,” Walker said. “They further stated that it could–it could incite the crowd.”

Walker said the approval for National Guard deployment “would eventually come from the acting secretary of defense and be relayed to me by Army senior leaders at 5:08 p.m., about three hours and 19 minutes later.”

Walker said he already had guardsmen on buses at the armory, ready to move to the Capitol.

— January 6, 5:20 p.m. “At 5:20 p.m., (in) less than 20 minutes, the District of Columbia National Guard arrived at the Capitol and were being sworn in by the United States Capitol Police. We helped to establish the security perimeter at the east side of the Capitol to facilitate the resumption of the joint session of Congress.”

Another witness at Wednesday’s hearing, Robert Salesses, was a deputy assistant secretary of defense on January 6.

But General Walker didn’t get approval to actually deploy the guard “until a little bit after 5 p.m.”

However, Salesses said the Acting Secretary of Defense made the decision to deploy the D.C. National Guard at 4:32. “As General Walker has pointed out, because I’ve seen all the timelines, he was not told that till 5:08,” Salesses said.

Sen. Roy Blunt (R-Mo.) interrupted, asking how it was possible for a deployment decision to be made at 4:32 p.m., but Walker — the person waiting for deployment authorization — “wasn’t told for more than half an hour after the decision was made?”

“Senator, I think that’s–that’s an issue,” Salesses responded. “There was decisions that were being made. There was communications that needed to take place. And then there was actions that had to be taken. All of that was happening at simultaneous times by different individuals. And I think that part of the challenge is that some of the delayed communications probably put some of the challenges that we had that day.”