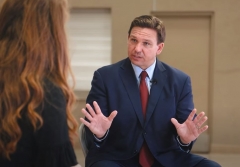 “It validates what I’m doing to have like a ’60 Minutes’ come down here and try to smear me,” Republican Florida Governor Ron DeSantis says, commenting on the liberal media’s partisan portrayal of prominent public figures dealing with COVID-19.

“Corporate media in this country has just evolved into a sad spectacle. I mean, they’re just pushing partisan narratives,” Gov. DeSantis told The Daily Caller when asked why media treat him so poorly and someone like Democrat New York Governor Andrew Cuomo so favorably.

“When you stand for the right things in this climate, you are going to get hit by corporate media,” DeSantis said, noting Florida’s success in handling the COVID-19 pandemic:

“They don’t like, one, they don’t like the fact that I’m a conservative governor. Two, they recognize Florida’s an important state and I think they were concerned about Trump winning Florida, they wanted to damage him. So, you have all these different things.

“But, the fact is, people are voting with their feet. People leave these lockdown states to come to Florida. They tried to say that Florida was going to be the worst state. In fact, we’re less than the national average in COVID mortality – even though we have one of the oldest populations in the United States. But, our senior mortality is less than, I think, 40 states, per capita.

“So, we’ve handled it much better. Obviously, they don’t want to admit that.

“But, I’m fine because, when you stand for the right things in this climate, you are going to get hit by corporate media. You can’t let that deter you from doing the right thing. And so, really, it validates what I’m doing to have like a ’60 Minutes’ come down here and try to smear me and do some of those things.”

Because media are picking their “heroes” based on ideology, instead of based on fact or results, they keep promoting “the wrong people,” DeSantis said, alluding to Democrat New York Governor Andrew Cuomo’s nursing home scandal and Biden COVID Adviser Dr. Anthony Fauci’s shifting and conflicting claims about the virus.

“If you’re going to try to create a hero against your bad guy, if it’s Trump or whoever else, at least get it right,” DeSantis said:

“But, I think on the flip side, you just have to ask yourself: okay, if you’re going to pick somebody to be your liberal hero, they seem to be picking the wrong people. I mean, like to pick Cuomo. Obviously, the guy’s had a lot of problems.

“And, then, they elevated Fauci to, basically, sainthood – and yet, we’ve seen Fauci’s been wrong about so many different things. And, clearly, he wasn’t honest with the American people about the origins of COVID.

“And, so, if you’re going to try to create a hero against your bad guy, if it’s Trump or whoever else, at least get it right. It seems like the people that they’re picking always end up having a lot of problems.”