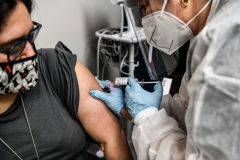 Heather Lieberman (L), 28, receives a COVID-19 vaccination from Yaquelin De La Cruz at the Research Centers of America in Hollywood, Florida, on August 13, 2020. (Photo by CHANDAN KHANNA/AFP via Getty Images)

(CNSNews.com) – Tests are being done right now on the safety of a vaccine for high school students with projections that a vaccine will be available for them by the fall, Dr. Anthony Fauci, director of the National Institute of Allergy and Infectious Diseases, said Sunday.

“And right now, the tests are being done to determine both safety and comparable immunogenicity in high school students. We project that high school students will very likely be able to be vaccinated by the fall term, maybe not the very first day, but certainly in the early part of the fall for that fall educational term,” Fauci told CBS “Face the Nation.”

“Elementary school kids, we’re doing this what’s called age de-escalation studies to make sure it’s safe and immunogenic in them. They likely will be able to get vaccinated by the very first quarter of 2022,” he said.

Host Margaret Brennan asked how widespread the New York strain is that has shown some resistance to antibody treatments and vaccines.

“Well, it’s not widespread yet, but it seems to be spreading pretty efficiently through the New York City metropolitan area and beyond,” Fauci said.

“One of the things you have to be careful about is that when you get a variant that has the capability of being rather vigorous in its capability of spreading, and fact is that it eludes a bit, not as much as the South African isolate, but eludes a bit some of the protection from the antibodies, from monoclonal antibodies as well as the vaccine,” he said.

“The one thing you want to do is to make sure you do not allow that to continue to spread. Two ways to do that, get people vaccinated as quickly and as expeditiously as possible, and above all, maintain the public health measures that we talk about so often, the masking, the physical distancing and the avoiding of congregate settings, particularly indoors. That’s what you can do to prevent the spread of a worrisome variant,” Fauci added.

As to concerns about a fourth wave, Fauci said, his concern “is based on the fact that although the cases are coming down very nicely, you have a very sharp diminution, over the past week and a half or so, we’ve seen that that decline has now done this, essentially, starting to plateau.”

“And, historically, if you look back at the different surges we’ve had, when they come down and then start to plateau at a very high level, plateauing at a level of 60,000 to 70,000 new cases per day is not an acceptable level. That is really very high, and if you look at what happened in Europe a few weeks ago, they’re usually a couple of weeks ahead of us in these patterns, they were coming down too, then they plateaued,” he said.

“And over the last week or so, they’ve had about a nine percent increase in cases. So the message we’re saying is that we do want to come back carefully and slowly about pulling back on mitigation methods, but don’t turn its switch on and off, because it really would be risky to have yet again another surge, which we do not want to happen because we’re plateauing at quite a high level. Sixty to seventy thousand new infections per day is quite high,” Fauci said.

Biden: ‘We Have Never Fully Lived Up to’ Our Founding Idea