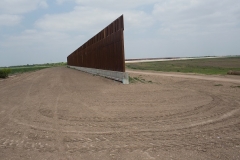 An unfinished section of the border wall in Granjeno, Texas. (Photo by Andrew Lichtenstein/Corbis via Getty Images)

(CNSNews.com) – Texas, facing wave after wave of illegal immigrants coming into this country, has had enough of the Biden administration’s indifference, Gov. Greg Abbott (R) said on Thursday.

Abbott said Texas plans to build a border wall where it is needed.

Those details about building the wall will be made next week. We’ve been through the process, however, of analyzing what it will take, the steps that are needed, the legal processes that are required. We believe that we can do it in a multistep process.

To make a fine point on it, Laura, listen, we have to build a border. I’ve been down here talking to the people in the Rio Grande Valley, and the way they are being overrun is reprehensible. It’s disastrous what the Biden administration has done.

President Trump had adequately secured our border. He had the remain-in-Mexico policy, he began building the border wall. And now, suddenly, all of that disappeared. And as you highlighted, it has led to a dramatic increase in the number of people coming across the border.

But it’s not just unaccompanied minors. It’s people who are causing great damage and harm to the residents right here in Del Rio as well as up and down the entire border.

As a result, that why I announced tonight a multitude of actions that Texas is taking, including the fact that Texas passed a budget adding more than $1 billion for border security in the state, which is a good start.

But Laura, also I announced that Texas is going to begin increasing arrests … arresting people coming across the border, arresting people for trespassing. And because I’ve declared it a disaster, that elevates the penalty, ensuring the people that we arrest were trespassing, they will be serving time in jail. We’re going to take this very seriously. We’re going to do everything possible to secure our border, including building a border wall.

The Biden administration this week said authorities encountered 180,034 people at the U.S.-Mexico border in the month of May, the fourth straight month of triple-digit encounters, and that doesn’t include the untold number who slipped in undetected.

“I feel certain that it is willful, it is purposeful,” Abbott said of the unchecked illegal influx.

“And so it is a joke to the Biden administration, but we are not taking it as a joke in Texas. We are going to step up and respond the way we must respond to secure the sovereignty of our state, to prevent the invasion that’s taken place in front of our very own eyes.”