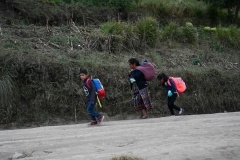 An indigenous woman and her children walk along a road in Guatemala. (Photo by JOHAN ORDONEZ/AFP via Getty Images)

(CNSNews.com) – “Get ready for an invasion at the border. Get ready,” Sen. Lindsey Graham told “Sunday Morning Futures” with Maria Bartiromo:

He was explaining what issues the Senate will tackle next:

Well, what comes next is, the border is breaking down as I speak. Immigration in 2022 will be a bigger issue than it was in 2016.

I just got back from the border. They’re changing every policy of Trump that worked. So, we’re going to be dealing with as a nation out-of-control immigration. They’re going to open up 100 percent the migrant facilities, living facilities, but we’re not opening up schools or businesses. I find it odd.

We’re going to raise your taxes. They’re going to try to. And they’re rolling back policies to allow the border to be overrun. The asylum claims are going to go through the roof. And, by the summer, you’re going to have a million people coming into this country illegally, all because the liberals can do it.

Graham said a million people would be three years’ worth, based on the numbers in the past three years:

“Yes, get ready for an invasion at the border. Get ready,” he said.

John Ratcliffe, who served as director of national security under President Trump, said the Biden administration created the crisis at the border and “they own it.”

We didn’t have a problem four months ago. I can tell you, from looking at all of the intelligence, we had no national security issue like we have down there right now. This was a situation where the Biden administration was so eager to want to declare Trump policies cruel at the border that they — that they took away policies that were clearly working.

And they reversed agreements that we had with Guatemala, Honduras, and El Salvador, and with Mexico to stop the traffic at Mexico’s southern border. And they invited this crisis. They created this crisis. And so I think it’s important now that they own this crisis.

This was totally unnecessary. And now it’s created a national security issue at our southern border that hadn’t existed. President Trump’s policies ended the migrant crisis two years ago, when he required that Mexico stop its traffic at the southern border and had agreements in place with what we call the Northern Triangle countries.

And what the Biden administration has done here has jeopardized national security for the sake of a political narrative that simply wasn’t true. And, unfortunately, it’s a trend that we’re — that we’re seeing, where Trump policies that were very clearly working, both domestically and internationally, the Biden administration is so eager to want to prove that the Trump campaign was wrong or took the wrong posture, that they’re jeopardizing our national security.