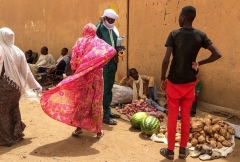 Vendors wait for customers at a market in north-eastern Mali, a former French colony in the Sahel. (Photo by Marie Wolfrom/AFP via Getty Images)

Paris (CNSNews.com) – In a bid to regain influence in an Africa increasingly turning towards China, lawmakers here have passed legislation designed to reform France’s development aid efforts, with an increased budget and a focus on grants rather than loans.

During a discussion on the text, Foreign Minister Jean-Yves Le Drian said France had “entered into a war of model and influence with China,” and stressed the role of development aid in advancing “French soft power” in the region.

“This time, we’ve set a date, with an effort rate, and we are giving ourselves the means to achieve it,” Le Drian said.

While advancing priorities including the fight against poverty, health, climate change, education, and gender equality, the aim is to change the way France provides aid to 19 African countries, mostly former colonies, as well as Haiti.

Magali Chelpi-den Hamer, head of the humanitarian and development program at the French Institute for International and Strategic Affairs, said the United States and other countries were also on the offensive in Africa.

“But not all countries operate with the same rules,” she said. “For instance China does not have this logic of limiting the level of debt in African countries.”

“Western countries also use debt leverage to gain influence in African countries, but unlike what China does, the strong ideology behind it is to avoid practices leading to over-indebtedness.”

The French initiative is also an attempt to improve France’s image in a region where many are opposed to its presence, and where many are critical of its support for governments accused of corruption.

The legislation passed by the lower house of parliament is in line with a pledge by President Emmanuel Macron to lift international development assistance from 0.37 percent of gross national income to 0.55 percent by the end of his five-year term in 2022.  It takes that even further, expressing the aspiration that France could devote 0.7 percent of its gross national income to development aid by 2025.

Chalpy-den Hamer said it remained to be seen how much of the aid actually reaches the target countries.

“I’d be interested to know the amounts that will effectively reach the countries,” she said, adding that due to “technical-accounting issues” – a reference to increasing administrative and other costs facing governmental and non-governmental service providers because of financial accountability requirements – the amounts reaching the countries of need would likely be low.

Still, she noted that the legislation envisages an evaluation commission that will report directly to lawmakers, providing what she said would be “a big step forward for more transparency.”

Another article in the legislation aims to return to the populations – in the form of development assistance – funds that were previously given to countries but embezzled by leaders for their own use, and kept on French soil until confiscated by French courts.

A study published last December found that a majority of Africans prefer the American development model – emphasizing the importance of the free market – over the Chinese one. It also showed, however, that Chinese influence is still widely regarded as positive for Africa – even if Africans feel their governments are becoming too indebted to China.

The study, by the research group Afrobarometer, concluded that China was well perceived in some countries in the Sahel region that are plagued by multiple political, social and security challenges. At a strategic level, China has been heavily involved in security and development activities, infrastructure projects related to BRI, and peacekeeping and security operations in the region, all seen as boosting China’s influence.

As an example, in Burkina Faso, another former French colony, the popularity of the Chinese development model rose from 20 to 39 percent in the five years since a previous survey was taken.