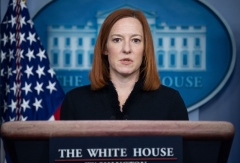 White House Press Secretary Jen Psaki speaks during a press briefing on March 10, 2021, in the Brady Briefing Room of the White House in Washington, DC. (Photo by MANDEL NGAN/AFP via Getty Images)

(CNSNews.com) – White House Press Secretary Jen Psaki on Thursday rejected the notion what is going on now at the U.S.-Mexico border is the result of “open borders policy” by the Biden administration.

Psaki said that Texas Governor Greg Abbott rejected a proposed agreement for DHS and FEMA to work with local mayors, non-governmental organizations (NGOs), and public health officials throughout the state to set up a system to provide COVID testing, and if necessary, isolation, and quarantining for migrants.

She also clarified that Customs and Border Patrol officers have been vaccinated.

Fox News White House Correspondent Pete Doocy asked whether it’s a problem that travelers flying into the United States from a foreign country must show proof of a negative COVID-19 test, but travelers walking across the border don’t need to as long as they don’t go to a port of entry.

PSAKI: Well, I think there’s been a lot of confusion what is happening at the border as it relates to people coming across and what happens when they come across. I know Governor Abbott down in Texas has expressed some of his concerns, and many of those have not been based in fact. So let me go through a few of those. I know we’re interested in facts around here.

One, Governor Abbott has referred to what is happening at the border as open borders, as us having an open borders policy. That is absolutely incorrect. The border is not open. The vast majority of individuals apprehended are encountered at the border continue to be denied entry and are returned under Title 42 as we’ve also mentioned. Also, he has suggested that we are not vaccinating CBP officers. Again, we like to deal with facts around here.

There’s no higher priority than the health and safety of our federal workforce. The Department of Homeland Security and CBP has been clear that currently more than 64,000 front-line DHS employees including members of U.S. Border Patrol have received a vaccination. So that’s another point just to provide full clarity. The other piece is the question about the testing of migrants at the border or testing of migrants as they’re coming across.

We have– DHS and FEMA have stepped in and work with local mayors, NGOs and public health officials in Texas to implement a system to provide COVID-19 testing and as needed isolation and quarantine for families released from the Border Patrol facilities. Their proposal and agreement would cover 100% of the expense of the testing, isolation and quarantine, but Governor Abbott has decided to reject that. So there’s a lot of confusion about these issues, and I just want to provide a point of clarity.

DOOCY: But not asking about Governor Abbott, asking about President Biden in charge of the federal government. Why are the feds relying on NGOs to administer these tests? We’ve talked to people down at the border who say migrants are only tested if they show symptoms. That seems like a loophole.

PSAKI: That’s not an accurate depiction. There’s an important role that NGOs, that local mayors, that local officials play in working together, and this is a proposal that was worked with DHS, with FEMA and others to help address and ensure that people are tested. Governor Abbott, I raised that simply because he had raised a concerned about that, and I wanted to be clear that we put forward a proposal. So I think the question is why is he standing in the way of local communities getting the funding and support they need to help with testing, isolation and quarantining efforts?

DOOCY: But again just a question about Biden’s administration policy. COVID is COVID. COVID at the Dulles Airport customs is the same as COVID in a border town. So I’m curious why is it that it’s enforced for people flying in from other countries, but it is not a requirement by the federal government to test or to prove a negative test anywhere along the border except for the port of entry?

PSAKI: I can just describe what our policies are. If there’s more to convey to you, I’m happy to do that.

Reuters quoted Obrador as saying, “They see him as the migrant president, and so many feel they’re going to reach the United States.”

“We need to work together to regulate the flow, because this business can’t be tackled from one day to the next,” the Mexican president said.

DOOCY: Mexico’s president says the people coming into the U.S. right now see President Biden as the migrant president. Does the White House take that as a compliment?

PSAKI: Migrant? Give me a little more context.

DOOCY: He says they see him as the migrant president, and so many feel they’re going to reach the United States. We need to work together to regulate the flow, because this business can’t be tackled from one day to the next.

PSAKI: First is, Mexico is an important partner and ensuring we’re addressing the flow of migrants from Central America through Mexico, many into the border of the United States. We have conveyed privately and publicly as well that the majority of the people will be turned away.

We also certainly recognize because the president and our administration has made a decision the way to humanely approach immigration is to allow for unaccompanied minors to come and be treated with humanity and be in a safe place while we’re considering — while we’re trying to get them in to homes and sponsored homes, that some more may have come to our border.

There have been of course a large flow of children across the border. We recognize that. That is — we made a policy decision because we felt it was the humane approach but The facts are vast majority of our people are turned away. The statistics bear that out.