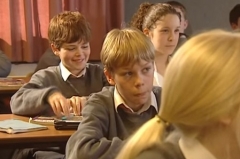 The guide also bans the use of words the school has judged to be “outdated,” The Daily Wire reports:

“A school in New York City that charges $57,000 a year has published a guide sent to students and parents that encourages them to alter their language to conform to gender identity ideology, including pushing students to stop referring to their parents as ‘mom’ and ‘dad.’

“Grace Church School published a 12-page memo that instructs people to stop using certain terms that it considers to be outdated and to replace those terms with “inclusive” terminology.”

“Instead of” the word or expression of disrepute, “At Grace we say” this, the manual explains. Thus, “mom and dad” and “parents” are to be replaced with the likes of “grown-ups,” “folks,” and “family.”

“Diverse/minority” are now replaced with “person of color, marginalized identity/population.”

Even the intentionally-amorphous “Happy Holidays” is replaced with “Have a great break!”

“Special needs” and “sexual preference” have now fallen from favor, the memo decrees.

The memo even bans the use of pet names, replacing terms of endearment like “Sweetheart” with “friend in the blue shirt.”

Founded in 1894, Grace Church School dubs itself New York City’s first choir boarding school. Over the years, it became co-educational and open to students of a variety of faiths and, in 2006, it officially separated from the Grace Church.