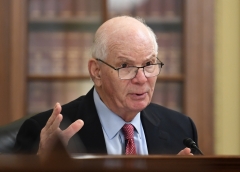 (CNS News) — When asked when Congress would balance the budget given that President Biden’s budget plan racks up $14.5 trillion in cumulative deficits over the next 10 years, Sen. Ben Cardin (D-Md.) said, for now, the focus should be on growing the economy and less concern about deficits.

He added that it is “very hard to predict” when the budget will be balanced.

At the U.S. Capitol on June 9, CNS News asked Sen. Cardin, “President Biden has presented Congress with a budget that proposes running $14.5 trillion in deficits over the next decade. When will Congress balance the budget?”

He responded, “Well, that’s an important question. Right now, we are coming out of a pandemic. This is the time which you need to make sure that our economy can perform. And that means not as concerned about deficits, more concerned about economic activity.”

“And it’s paid off, our economy is strong even though, we have, getting out of a national pandemic, a global pandemic, so I think you need to take a look at where you are,” he said. “We are a wealthy enough nation that we should have a glide payoff towards balancing our budget.”

“And I know a lot of us are very concerned about that,” said Cardin. “So, we’re going to work for fiscal responsibility. But right now, it’s important to stimulate the economy.”

On asking what year he thought the budget would be balanced, Sen. Cardin responded, “Well, I think that is very hard to predict, depends on the economic activity. If economy continues at this high — pay-up may be sooner than later.”

In “The Budget Message of the President” Biden defined the budget as an investment in the economy. “With the resources provided by the American Rescue Plan, we are turning the corner on the pandemic, and powering an equitable economic recovery,” said the president.

The budget is providing for “additional proposals to reinvest in the foundations of our nation’s strength—expanding economic opportunity, improving education, tackling the climate crisis, and ensuring a strong national defense while restoring America’s place in the world,” said Biden.