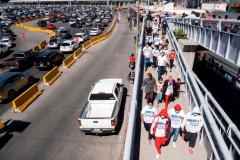 (CNSNews.com) – Thousands of illegal immigrants are flooding the U.S.-Mexico border at the invitation of the Biden administration, and they’re being offered checks, health insurance and housing, Rep. Beth Van Duyne (R-Texas) told Fox Business’s “Mornings with Maria Bartiromo” on Thursday.

“They’re being offered pretty much everything, including housing, and then we’re surprised that during his campaign when Biden said he was going to open the borders, now we’re somehow surprised that it was created. This is a created crisis, and we shouldn’t be surprised. At the same time, we’re trying to open up the country. Having this at our southern border is crazy,” she said.

The congressman called it “a major national security on a number of fronts.”

And as we’re sitting here trying to fight a pandemic, this administration is knowingly allowing people into this country illegally that are carrying COVID-19, which is a direct violation to title 42, which basically says we’re not going to import the COVID-19 virus into our country.

So one of the ways to actually be able to combat and maybe close our borders and have more secure borders is that some of the AGs start to step up and actually file suit and insist that the Biden administration keep this country safe and not import folks with COVID-19, because we have an opportunity to do that. I’m not sure if the AGs will do that, but you can’t have it both ways.

You can’t keep businesses closed, and you can’t keep people out of school at the same time as opening up the border with covid-19 folks. So if we are saying that, okay, we’re not going to follow title 42, you’re saying that the pandemic is over, you can’t have it both ways. Call it a crisis, and then open up our borders.

You have elected officials who are listening to them, saying this pandemic has been — we have been forcing these things closed, we’ve been forcing schools closed. we’ve been forcing businesses out of work now for 12 months. It’s time we reopen the economy. We’re giving out 6 million vaccinations. In Texas alone, thousands of people are being vaccinated every day.

We have protocols in place to keep people safe. We have to open up the economy. We need those blue states instead of getting $350 billion from the latest stimulus package, we need them to follow that kind of cue and understand you can’t continue spending trillions of dollars and shut down the economy at the same time.

We have to start paying this money back at some point, and right now it’s on the backs of working families, small business owners, that have put their life savings into these businesses, we’re seeing it every day. We have to reopen the economy, and we have to be careful in opening up our borders. It’s doing none of those things.