President Biden’s German Shepards were sent back to Delaware this week after the youngest dog, 3-year-old Major, injured a White House staffer, but the Bidens’ dog trainer told TMZ it’s a “solvable” problem that can be fixed after a bit of training.

“You’re living in a quiet home, just family and friends coming around and you take it from a very calm environment to a very stressful, active, a lot of people you don’t know — do they like dogs? Do they not like dogs? And the interactions go from limited to numerous,” Mark Tobin, the Bidens’ dog trainer, explained to TMZ.

“Training is the key with anything that happens,” he continued. “It’s solvable, but it takes two: You have to put the time and effort in there, and go in a little slower this time. … We have to put that dog in that stress, work through the stress, and really try to kind of help this dog calm down and say look, ‘It’s ok, I got ya.'”

BIDEN’S DOG INJURED SOMEONE AT THE WHITE HOUSE, PSAKI CONFIRMS

White House Press Secretary Jen Psaki said Tuesday that the First Dogs “are still getting acclimated and accustomed to their new surroundings and new people.”

“On Monday, the first family’s younger dog, Major, was surprised by an unfamiliar person and reacted in a way that resulted in a minor injury to the individual, which was handled by the White House medical unit with no further treatment needed,” she said. 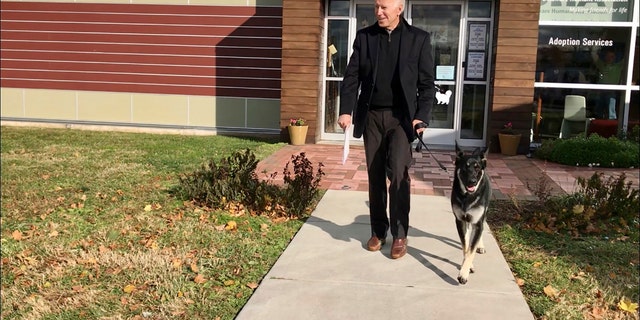 Psaki said the trip back to Delaware was pre-planned though and that the dogs will be returning to the White House soon.

President Biden slipped while playing with Major last November and fractured a bone in his right foot, forcing him to wear a boot for several weeks.

The pups first moved into the White House on Jan. 25 after spending the first days of the Biden administration in Delaware.