It was late February last year. The Trump Administration sent a formal spending request to Capitol Hill to help address the spreading scourge of COVID-19. The administration’s request was a scant $2.5 billion. Less than half of that was “new money.” $1.2 billion came from funds shuffled around from other accounts.

Sen. Richard Shelby, R-Ala., is now the leading Republican on the Senate Appropriations Committee. Back then, Shelby chaired the panel in charge of the federal purse strings. 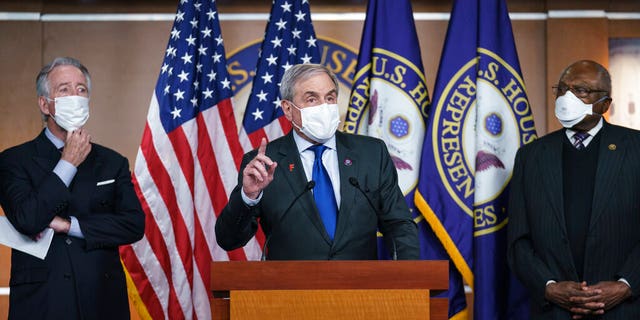 “This is no ordinary crisis coming up,” said Shelby. “I would call this a dire emergency.”

The Alabama Republican worried the administration and other fiscal conservatives might undercut what the true need was to address the virus.

“If you lowball something like this, you’ll pay for it later,” augured Shelby.

The Trump Administration resisted the spending. But a compromise to address COVID-19 was already hurtling through Congress. President Trump dismissed the severity of the virus.

“It’s going to disappear,” said Mr. Trump. “One day, it’s like a miracle. It will disappear.”

The House and Senate have now approved differing versions of what is expected to become the sixth major piece of COVID-related legislation since last winter. This measure costs $1.9 trillion. The House is slated to align with Senate changes to the plan before sending the package to President Biden’s desk for signature.

The House and Senate approved the first coronavirus package in early March last year. That bill cost $8.3 billion in emergency spending, split between the Department of Health and Human Services and the Centers for Disease Control.

By mid-March, the House and Senate approved a second package of “technical fixes.” That package included money for Medicaid, testing, and unemployment insurance, costing about $1 billion. 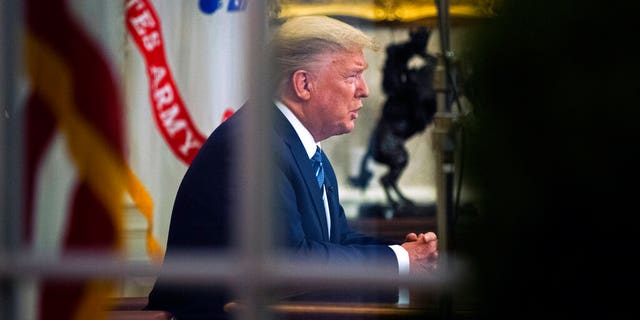 President Donald Trump addresses the nation from the Oval Office about the coronavirus outbreak at the White House, Wednesday, March 11, 2020, in Washington.  (AP)

However, the specter of the pandemic metastasized throughout the month. After a verbal brawl between senators hung up over the third bill, lawmakers passed a massive $2.3 trillion measure at the end of March 2020.

The next bill focused mostly on reloading the Paycheck Protection Program, adding money for testing, and providing funds for hospitals. The House and Senate approved this measure in mid-April 2020. Some characterized the fourth measure as “COVID 3.5.” But the bill doled out $470 billion. It’s hard to see how something costing nearly half a trillion dollars constitutes “half” a bill. But then again, this is legislating in the age of COVID.

SEN. TIM SCOTT BLASTS COVID RELIEF BILL PASSED BY SENATE: ‘IF YOU DON’T NEED HELP, YOU SHOULDN’T GET IT’

Things lay dormant through the summer. The House alone approved a staggering $3 trillion bill in the spring – the most-expensive bill in Congressional history. But that plan was DOA and wasn’t going anywhere in the Senate.

So, that’s five bills. They total close to $4 trillion – nearly another $2 trillion is in the pipeline on measure six up this week in the House.

By way of comparison, in Fiscal Year 2019 (let’s ignore FY ’20, because it was so warped by the pandemic), the government spent a grand total of $4.5 trillion. The first section of spending is “mandatory” spending. That’s money the government is obligated to spend. There is no annual allocation of funding from Congress each year. These are “mandatory obligations” for entitlements like Medicare, Medicaid, and Social Security – and by far, constitute the largest chunk of federal spending. Mandatory spending consumed $2.735 trillion in FY ’19, much of it based on money owed beneficiaries. 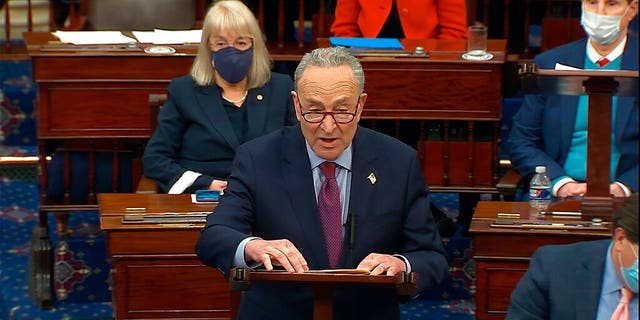 FILE: Senate Majority Leader Chuck Schumer of N.Y., speaks before the final vote on the Senate version of the COVID-19 relief bill in the Senate at the U.S. Capitol in Washington, Saturday, March 6, 2021.  (Senate Television via AP)

“Discretionary” spending is the section of the budget which Congress controls and allocates funds each year. Congress appropriated around $1.369 trillion in FY ’19.

The Treasury also forked out an additional $375 billion for service on the national debt.

One wonders if there will be additional aid bills necessary in the future. It hinges on how the next few months go with the pandemic.

You could feel coronavirus creeping up around us in early March last year.

On Friday night, March 6, 2020, I recall going to dinner at Hard Times Café in Old Town Alexandria, VA. It was the second-to-last-time I ate out. After the waiter brought my Cincinnati three-way chili, I cleaned my hands with a pocket of sanitizer I kept in my pocket. I did the same thing after he refilled my root beer.

Last month, the manager of that restaurant, Mike Dankwa, died of COVID-19.

The last time I ate in a restaurant was on Saturday, March 7, 2021. Mintwood Place in the Adams-Morgan neighborhood of DC. The restaurant bustled. I was a little tired at the end of the meal and it was getting late. But something told me this might be the last time we’d be out for a while. I suggested to my wife and friends that we walk down the block to Jack Rose, a world-renowned whisky and bourbon bar.

I ordered a dram of Allt-a’-Bhainne. Pronounced all-tuh-BAHN in Gaelic, I won’t blame you for never having heard of the obscure Scottish distillery. But if you’ve ever tasted a smoky note in a shot of Chivas Regal, it came from Allt-a’-Bhainne. I chose Allt-a’-Bhainne that night because you just never see it available as a single malt. A place with an exhaustive collection like Jack Rose naturally had several bottles. But I knew whatever I had that night had to be special. I worried about what was ahead.

As we were about to leave, a friend I hadn’t seen in years spotted me and ran up to give me a hug. I felt bad eluding her.

“Coronavirus!” I yelled over the barroom din.

She got it immediately.

I bumped elbows with my friend.

Just a few days before that, I had an off-the-record chat with Rep. John Katko, R-N.Y., near Statuary Hall in the Capitol. At the end, Katko went to shake my hand. I told Katko I wasn’t shaking hands with anybody until things improved. It was the first time I told someone I wasn’t shaking hands.

Within a few days, no one had to be told.

By mid-March, I did a TV report with Reps. Debbie Dingell, D-Mich., and Alexandria Ocasio-Cortez, D-N.Y., showing me how they would elbow bump constituents or do a toe tap in lieu of shaking hands.

I remember doing my last live report outside the Capitol last March after the House approved the last big COVID bill. When I left that evening, I wondered how long until I would return to the Capitol. Congress was shutting down for a while. I wasn’t back for several weeks. It wasn’t long until the Senate conducted its first “virtual” hearing. The Senate Intelligence Committee convened to confirm then Rep. John Ratcliffe, R-Texas, as Director of National Intelligence.

“We have asked members to watch as much of the hearings as they can from their offices and only to come to the hearing room to ask questions,” said then Intelligence Committee Chairman Richard Burr, R-N.C.

Every hearing now on Capitol Hill looks like that Intelligence Committee hearing last May.

I’ve been back on Capitol Hill most days since spring. I periodically report from home if Congress isn’t in session, having converted an upstairs bedroom into a mini studio. An array of books about Congress line the shelf behind me. Master of the Senate by Robert Caro. The Almanac of American Politics from 1994. A Lego model of the Capitol fits nicely on the shelf.

But here we are. A year later.

Congress may still need to tackle more COVID-related legislation in upcoming bills, even if the pandemic winds down.

When asked if more coronavirus-related legislation was needed, Pelosi replied “it’s a question of the science. We will have legislation to address that as long as it exists.”

And just for good measure, I recently acquired a bottle of 23-year-old Allt-a’-Bhainne the other day, independently bottled by Duncan Taylor.

An ode to hopefully ending the pandemic soon.