In a 7-2 decision, Barrett was joined by Chief Justice John Roberts and Justices Clarence Thomas, Samuel Alito, Elena Kagan, Neil Gorsuch and Brett Kavanaugh in ruling that the documents were protected by what is known as the deliberative process privilege, even though the conclusions in the drafts ultimately reflected the agencies’ final decisions.

“The deliberative process privilege protects the draft biological opinions from disclosure because they are both predecisional and deliberative,” Barrett wrote, reversing the Ninth Circuit Court of Appeals’ ruling in the case.

Justice Stephen Breyer wrote a dissenting opinion, joined by Justice Sonia Sotomayor. Breyer argued that there is a difference between a “Draft Biological Opinion” and a “Draft of a Draft Biological Opinion.” While agreeing with the majority that a draft of a draft should be protected, Breyer argued that a draft biological opinion “is a ‘final’ document with respect to its content,” and does not require further deliberation regarding content. 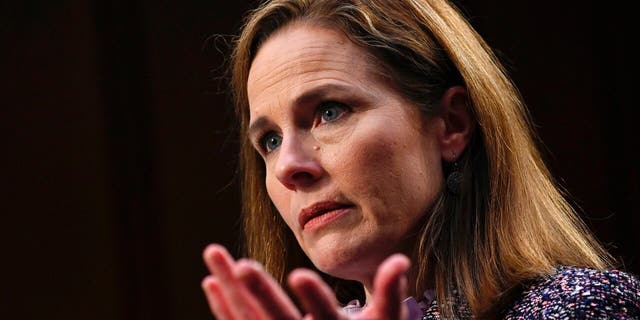 Under normal circumstances, Barrett would have read a portion of her opinion from the bench, but the Supreme Court building has been closed due to the coronavirus pandemic. As a result, proceedings have been held remotely and opinions have only been released online.

The case was also the first one in which Barrett had participated in oral arguments. Her first question presented a hypothetical where an agency official might mark a document as a draft in order to protect it from disclosure. She asked “what other factors would a court consider” in determining whether or not a document should be protected.

Fox News’ Bill Mears and The Associated Press contributed to this report.