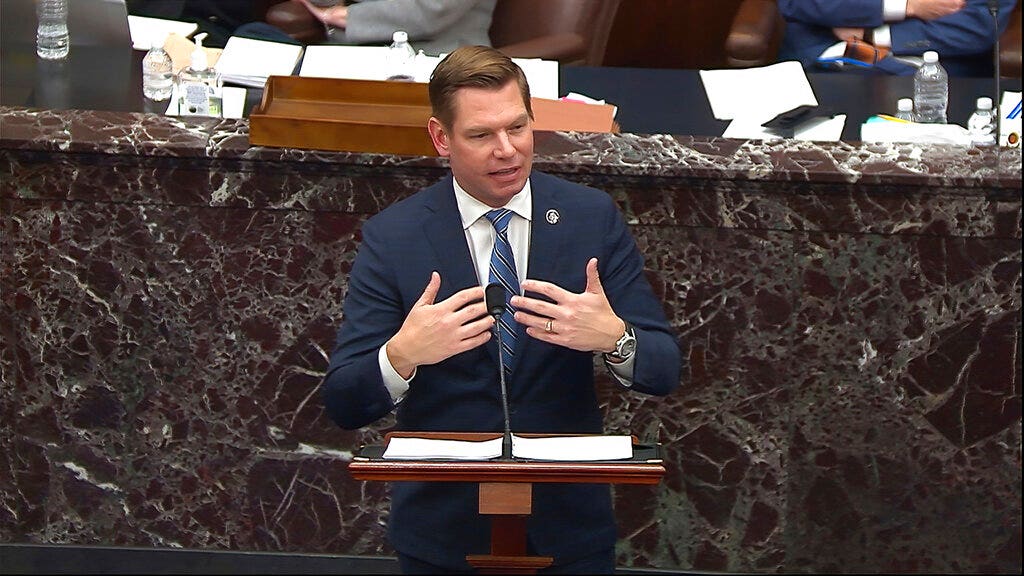 Rep. Eric Swalwell, one of the House impeachment managers, filed a lawsuit against former President Trump saying he must be held financially responsible for destruction on Jan. 6 when a pro-Trump mob stormed the Capitol.

The California Democrat on Friday filed a 65-page lawsuit in U.S. District Court in Washington, D.C., against Trump, his son Donald Trump Jr., his lawyer Rudy Giuliani and GOP Rep. Mo Brooks accusing them of inciting the Jan. 6 riot and demanding they be held responsible in court for the suffering that followed.

“The Defendants assembled, inflamed and incited the mob, and as such are wholly responsible for the injury and destruction that followed,” Swalwell said in a statement about the lawsuit.

Swalwell’s lawsuit alleges nine counts against Trump and the others ranging from conspiracy to violate civil rights to intentional infliction of emotional distress on Swalwell.

The lawsuit doesn’t specify the amount of money and punitive damages Swalwell is seeking. He is demanding a jury trial.

Jason Miller, a senior adviser to Trump, ripped Swalwell in a statement to Fox News for the congressman’s ties to an alleged Chinese spy, known as Fang Fang or Christine Fang. Federal authorities alerted Swalwell to Fang’s activities around 2015 in a defensive briefing, Axios first reported.

“Eric Swalwell is a low-life with no credibility who got caught ‘dating’ the Chinese spy Fang-Fang and makes disgusting bodily noises on national television,” Miller said in a statement. “Now, after failing miserably with two impeachment hoaxes, ‘Mr. Fang-Fang’ is doing the bidding of his Chinese masters and attacking our greatest President with yet another witch hunt. It’s a disgrace that a compromised Member of Congress like Swalwell still sits on the House Intelligence Committee.”

Swalwell was on the House Democrats’ team that prosecuted the impeachment case against Trump earlier this year for one count of inciting an insurrection. Trump was acquitted by the Senate.

Trump’s legal team argued that the former president’s comments at a rally before the Jan. 6 violence broke out did not incite the riot and Trump specifically called for supporters to march “peacefully and patriotically” to the Capitol.

REP. BENNIE THOMPSON FILES CIVIL LAWSUIT AGAINST TRUMP FOR JAN. 6 RIOT: ‘WE MUST HOLD HIM ACCOUNTABLE’

“His gleeful support of violent white supremacists led to a breach of the Capitol that put my life, and that of my colleagues, in grave danger,” Thompson said last month in filing his lawsuit.