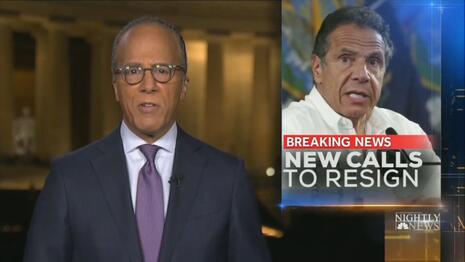 Two days after initially ignoring reports that surfaced of a sixth woman accusing New York Governor Andrew Cuomo of sexual misconduct, this time alleging he put his hands under her clothes and “aggressively groped” her in the executive mansion, Thursday’s NBC Nightly News finally discovered the story but could only spare a fleeting 17 seconds of airtime. This meager news brief left out a bipartisan effort by state lawmakers to remove the embattled Governor including an impeachment investigation.

“Also tonight, the allegation from a sixth woman against New York Governor Andrew Cuomo has been referred to police. A female aide accused Cuomo of groping her last year at the Governor’s Mansion, according to the Albany Times Union,” NBC anchor Lester Holt reported. “Cuomo denies ever inappropriately touching any woman.”

In contrast to Holt, CBS Evening News anchor Norah O’Donnell put the impeachment effort upfront as she led into the full report:

We’re going to turn now to some breaking news tonight on the sexual harassment allegations against New York Governor Andrew Cuomo. Lawmakers have just launched an impeachment investigation. And it comes as a growing number of New York Democrats are calling on Cuomo to resign.

“Tonight, the allegations by a 6th woman were referred to Albany Police by the governor’s office itself because of a legal obligation to do so,” announced CBS correspondent Jericka Duncan. “Police say they have not opened an investigation but say what allegedly happened may rise to the level of a crime.”

She added: “More than 55 the state’s Democratic lawmakers and the mayor of New York City want the governor out.”

But while CBS only cared about Democratic lawmakers for whatever reason, Fox News Channel’s Special Report anchor Bret Baier talked about how unified “every” New York lawmaker was, announcing just seconds into the show:

Breaking tonight, embattled New York Democratic Governor Andrew Cuomo’s problems are increasing with every New York lawmaker calling for his removal. Tonight, a group of almost 60 of his fellow Democrats now demanding Cuomo’s resignation following a new claim the governor reached under the shirt of an agent and fondled her. It’s the most graphic of the allegations from the six other women so far.

Over on ABC’s World News Tonight, correspondent Stephanie Ramos noted that it was Cuomo’s own denies of misconduct that spurred her to come forward:

RAMOS: The paper reports she made her claim after Cuomo declared this:

CUOMO: Want you to know this from me directly. I never touched anyone inappropriately.

RAMOS: That denial reportedly prompted the aide, a young woman who was not identified, to tell a coworker that Cuomo had summoned her to the governor’s mansion to help with his cell phone and while they were alone, he reached under her shirt.

Instead of reporting any of those extra details of the story, NBC continued to focus on drama with the British royal family and hyped President Biden’s primetime address later in the night.

NBC’s flippant coverage of the woman accusing Governor Cuomo of groping her was made possible because of lucrative sponsorships from Amazon and Liberty Mutual. Their contact information is linked so you can tell them about the biased news they fund.

The transcript is below:

LESTER HOLT: Also tonight, the allegation from a sixth woman against New York Governor Andrew Cuomo has been referred to police. A female aide accused Cuomo of groping her last year at the Governor’s Mansion, according to the Albany Times Union. Cuomo denies ever inappropriately touching any woman.