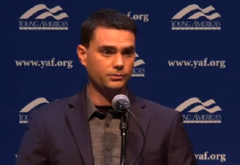 In the first of three tweets, Shapiro listed three falsehoods the media have successfully duped “normal people” into believing:

Things normal people think because the media are damned liars:

2. DeSantis is both corrupt and dangerous;

3. Hunter Biden is a soulful innocent gone wrong, and the laptop story was Russian disinformation.

“The media are damned liars,” Shapiro said in his next post, declaring that the job of today’s media is no longer journalism, but Democrat propaganda:

Lies the media have promulgated about DeSantis because they fear his 2024 candidacy:

1. His willingness to allow local officials to open beaches, etc., would lead to massive death (lie);

Likewise, Gov. DeSantis has been under constant, unsupported attacks from the media because he has reopened his state, refused to enforce a mask mandate, and issued an executive order prohibiting vaccine passports. Yet, Florida has continued to hold up well, compared to many other states, in the face of the coronavirus.