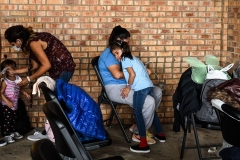 Migrants from Central America wait for a bus after they are dropped off by the US Customs and Border Protection at a bus station in Brownsville, Texas, on March 15, 2021. (Photo by CHANDAN KHANNA/AFP via Getty Images)

(CNSNews.com) – Amid warnings from medical experts that the COVID pandemic is far from over, asylum-seekers and others continue flooding across the Southwest border, some of them bringing COVID-19 infections with them.

Brownsville, Texas Mayor Juan ‘Trey’ Mendez told CNN on Saturday that many of those coming into Brownsville are coming from nearby Matamoros, Mexico, where the Trump administration ordered them to wait under the program dubbed “remain in Mexico.”

Mendez noted that the Matamoros camp was cleared out two or three weeks ago, “but we’re still seeing people that were part of the program that are coming over. There’s probably still about 1,000 to 1,500 people left in Matamoros from that. So we’re seeing about 75 to 100 a day coming for that. All of those people are being testing (for COVID) by the federal government or their partners in Mexico.

Then we’ve got the asylum seekers, the people that we’re hearing about that are crossing and being apprehended by Border Patrol. They’re releasing probably about 200 people per day from that group, and we are testing them here in Brownsville.

They’re arriving — they’re being transported by the federal government. We’re receiving them and we were testing them up until yesterday, when the DHS, the Department of Homeland Security, took over that testing, and it’s going actually really well. We’re seeing a pretty low positivity rate, and really our focus is trying to get them in and get them out to their sponsors or their family.

And what happens if somebody does test positive for coronavirus?

“OK, if somebody tests positive, then what we’re doing is we’re issuing them an order stating the CDC guidelines and letting them know that they should quarantine, and we are offering a hotel that’s being paid by a third party provider here in town, free of charge to them, and then they are advised to go to that hotel. I will say not everybody chooses to go to the hotel, but some people do,” Mendez said.

Unlike other border towns, Mayor Mendez said Brownsville has not been “overwhelmed” by the influx of foreigners, many of whom are taken to the local bus station for transportation to other places in the United States.

President Biden halted construction on President Trump’s border wall; he reinstated the “catch and release” policy as it applies to unaccompanied minors; and he ended the remain-in-Mexico program, all of which discouraged illegal immigration under Trump.

Nevertheless, “I don’t think it’s a failure at this point,” Mendez said of Biden’s policies:

When you have the opportunity to start putting families back together that were separated by the Trump administration, I think that’s a very positive thing. Where the failures lie is in these other governments, these other countries, Central America, South America, that’s where the real crisis is happening. And we have a humanitarian crisis, there’s a lot of crime, a very large drug trade.

And I’m happy, actually, that the administration is starting to focus on trying to address the issues in those countries and trying to process a lot of these people there. But we’re not there yet.

So, at this point I don’t see any failures yet. The failures I see, like I said, are in other countries, and partially due to some of the former administration’s policies. But at this point, if you ask me when will we be overwhelmed, I’ve said consistently there’s really two things that will really concern me. One of them is if we see the numbers start increasing probably to where they’re double what they are now.

And then if we start to see a positivity rate on the COVID side, higher than, let’s say, 10 percent. We’re still in the six percent, seven percent range, when it comes to positivity rates. And then on the numbers, we have seen the numbers increase, which is concerning, but we’re still not where we’re going to be overwhelmed. We probably still have about double our capacity, pretty close to that.