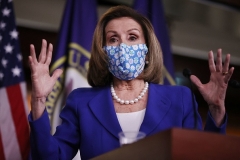 Speaker of the House Nancy Pelosi (D-Calif.) speaks at a news conference on March 19, 2021. (Photo by CHIP SOMODEVILLA/POOL/AFP via Getty Images)

(CNSNews.com) – “Infrastructure is renewal, so it’s good that we are talking about it in a season of renewal,” House Speaker Nancy Pelosi (D-Calif.) told a news conference on Holy Thursday as she included Joe Biden in the list of “big-thinking” presidents.

She said the joy of this season is enhanced by the “transformational” efforts of Democrats:

Christmas is joyous, Easter is glorious, Christ has risen. So I am, shall we say, excited about what is happening this week in this season of spring, this season of renewal, this season of Holy Week, whether it is Passover, Easter, Ramadan — whatever you observe or don’t observe — I wish you the joy of the season.

And the joy in the season is marked by another renewal — the renewal of reconstruction that President Biden put forth yesterday (Wednesday) in his presentation. He promised–he promised when he took the oath of office that we would ‘build back better’. He also promised help is on the way, and help is here — help is here.

I will get to that in a moment, but in building back better, what he presented yesterday, he was in the tradition of America to think big.

Pelosi talked about other, earlier presidents and their major contributions to infrastructure: Thomas Jefferson’s Louisiana purchase, construction of the Cumberland Road and the Erie Canal; and Teddy Roosevelt’s creation of the National Park Service. Later, she mentioned Dwight Eisenhower’s construction of the interstate highway system.

Those presidents, she said, were “thinking big, transformational, making a difference for our country.”

“And now in this century, President Biden is undertaking something in the tradition of thinking big, being transformational, and creating jobs for America. It is quite remarkable the comprehensive nature of what he put forward,” Pelosi said:

It’s really quite remarkable and comprehensive plan…It’s about jobs, it’s about the jobs and building infrastructure, it’s about the jobs that are created by promoting commerce, good-paying jobs, but we need people to be ready for them, and that is what this package that the President put forth does.

It makes bold investments in broadband, investing in long-neglected areas of infrastructure whether we are talking about clean water, getting the lead out of building schools, the issues relating to childcare as I mentioned, of seniors’ long-term care, veterans’ facilities, the list goes on, and again more to come in the next package.

The plan Biden outlined on Wednesday is part one of his ‘build back better’ agenda. Part two will focus on social infrastructure — or “human infrastructure,” as Pelosi put it.)

Pelosi expressed the hope for bipartisanship on Biden’s multi-trillion-dollar plan (not likely). “So we are very excited about what he did, and as I said to some of my colleagues on a call yesterday — bipartisan call with the administration — that infrastructure is renewal, so it’s good that we are talking about it in a season of renewal.”

Pelosi also made it clear that her party will make every effort to ensure that Americans understand what Democrats have done for them lately in passing a $1.9 trillion COVID-relief-plus package last  month.

At the same time, we are still very much insistent that everyone understand what is in the rescue package and how they can readily avail themselves of the benefits.

Sometimes people just don’t know if they qualify for a low-income tax credit or a tax–a child tax credit that is refundable, and so next week we are having a teach-in, members have had great opportunities in their districts already to do some kind of spreading of the information, and that is part of what we will take advantage of as we put forth more information and how community groups can be helpful in making sure that everyone who is eligible for a benefit knows that.

So again, at the time when we passed it, we said it’s about vaccinations in the arms, it’s about money in the pockets, it’s about children safely in the schools. It’s about people safely back to work. In order for that to happen, there are many provisions in the bill that relate to childcare and the rest, and we want to make sure people know how to avail themselves of it, so we are very excited about that.

“People have to know,” she said. “And that is what we are engaged in, making sure people know what their opportunity is. And again, I repeat next Wednesday, April 7th is–we’ll be holding our teach in as part of our day of action to lift up how the package saves lives and livelihoods in our communities.

“I’m so proud of House Democrats for the courage that they have had to go forward with the COVID package. And now, that was rescue — this is now into recovery about jobs, jobs, jobs, jobs. And again, the president said in the campaign, help is on the way. Now we can proudly say help is here. And by the way, more to come,” Pelosi promised.