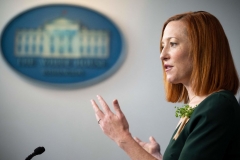 (CNSNews.com) – White House Press Secretary Jen Psaki said Friday that despite President Joe Biden defending the filibuster in 2005, he thinks it’s being abused, because last year it was used five times as much as it was between 1917 and 1971, and it allows for “systemic racism” as it pertains to voting rights.

During the White House press briefing, Fox News White House Correspondent Peter Doocy asked Psaki, “The president said he thinks the filibuster is a legacy of a Jim Crow era. Did he think that it was a legacy of the Jim Crow era in 2005 when he defended the filibuster and said, ‘Altering Senate rules to help one political fight or another could become standard operating procedure which in my view would be disastrous?’

PSAKI: One of the things he talked about yesterday was the fact that between 1917 and 1971, the filibuster was used about 58 times. Last year alone, it was used five times that many. It is not being used for the intended purpose. It is being abused, and yes, there are scenarios as it relates to voting rights, where it is pressing, it is allowing for systematic racism in the country, so that’s the concern he was expressing.

DOOCY: Following that, there are concerns on the right that if you get rid of the filibuster, it effectively means one party rule. So is that what the president was getting at when he was asked about 2024 and he said, I have no idea if there will be a Republican Party?

PSAKI: That certainly wasn’t what he was getting at given as part of his answer, he conveyed that his objective and his hope is to work with Republicans. He wants to get work done for the American people.

He wants to put in place solutions, put people back to work, get the pandemic under control, make voting easier and more accessible, and it’s really on Republicans in Congress to decide if they’re going to be part of the solution or if they’re going to be part of obstruction, so he’s leaving it up to them to make the decision on what role they want to play in history.