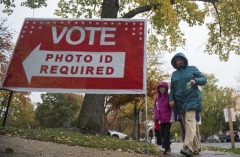 That’s according to a new Rasmussen Reports national telephone and online survey showing that 75 percent of likely U.S. voters believe voters should be required to show photo identification, such as a driver’s license, before being allowed to vote.

The survey asked the following two questions of 1,000 likely voters on March 14-15:

1. Should voters be required to show photo identification such as a driver’s license before being allowed to vote?
— 75 percent said yes, 21 percent said no.

Rasmussen notes that 36 states have enacted some form of voter ID law, most recently Georgia, which now requires absentee voters to prove their identity.

But H.R.1, a bill passed by the House of Representatives, would nullify state voter ID laws if the Senate also passes the bill.

Other findings from the Rasmussen survey:

— Support for voter ID laws has increased since 2018, when 67 percent said voters should be required to show photo identification to vote.

— Eighty-nine percent of Republicans support voter ID requirements, as do 60 percent of Democrats and 77 percent of voters not affiliated with either major party.

— Majorities of whites (74%), blacks (69%) and other minorities (82%) say voters should be required to show photo identification before being allowed to vote.

— Voters who strongly approve of Joe Biden’s job performance as president were most likely to say voter ID laws are discriminatory.

Rasmussen said the poll’s margin of error is +/- 3 percentage points with a 95 percent level of confidence.