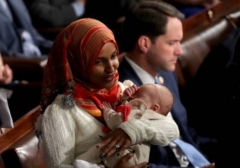 (CNSNews.com) – Rep. Ilhan Omar (D.-Minn.) sent out a tweet on Monday that featured a video clip of her doing an interview with ABC News’ “GMA3” program about the situation at the U.S.-Mexico border and stating that: “Every child deserves safety.”

“We should not be indefinitely detaining these children and they shouldn’t be in these living conditions,” she said.

“They should be released as soon as possible to a family member, a host family, or a nonprofit shelter,” she said.