“Are you for real?” Rep. Alexandria Ocasio-Cortez (D-N.Y.) asks in a video she’s posted on social media, in which she claims that there is no border crisis and that the U.S. is to blame for the influx of immigrants breaking into the country. 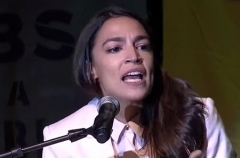 In the video posted to her Instagram account and shared on her Twitter page, Ocasio-Cortez says the U.S. should be held accountable for its imperialism and contribution to climate change, as well as for the trade crisis it caused:

.@AOC summing up the systemic problems in our immigration system in a minute and a half. pic.twitter.com/bFY20ne6Gb

Ocasio-Cortez says “Our interventionalist history in foreign policy and history over decades of destabilization” demands a “foreign policy solution.”

“It’s also a carceral crisis” because the U.S. immigration system is one that incarcerates illegal immigrants, Ocasio-Cortez says:

“And also, it’s a carceral crisis because as I have already said, even during this term and this president, our immigration system is based and designed on our carceral system.”