The president may support changes if filibuster leads to gridlock in Congress. Ranking member of the House Budget Committee Rep. Jason Smith with reaction.

A reporter asked President Biden during Thursday’s news conference if he agreed with Barack Obama that the filibuster is ‘relic’ of the Jim Crow era.

But multiple times through the years, Vice President Harris and many other Democrats have embraced the legislative filibuster, which sets a 60-vote hurdle in the Senate for any bills to make it to a final roll call.

“We are writing to urge you to support our efforts to preserve existing rules, practices, and traditions,” around the filibuster, the letter said. “[W]e are asking you to join us in opposing any effort to curtail the existing rights and prerogatives of Senators to engage in full, robust, and extended debate as we consider legislation before this body in the future.” 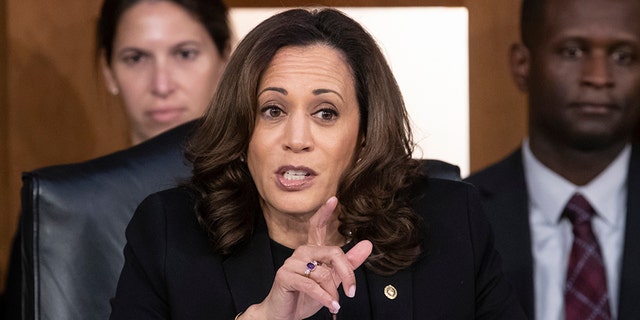 At the time, Republicans controlled the House of Representatives, the Senate and the White House.

And in the following years, Harris joined Senate Democrats in regularly using the filibuster to block legislation in the Senate.

She backed the filibuster of a police reform bill from Sen. Tim Scott, R-S.C., and multiple efforts Republicans in the summer and fall of 2020 to pass coronavirus stimulus bills. Politico characterized Harris as “leading the way” on the filibuster against police reform.

Congress did not pass anything in the way of coronavirus stimulus until it finally sent legislation to former President Donald Trump in December. It still has not addressed police reform.

Harris also sided with Democrats in filibusters against the Born-Alive Abortion Survivors Protection Act and the Pain-Capable Unborn Child Protection Act, as well as multiple other bills, in recent years.

“Less than four years ago, when Donald Trump was President and Mitch McConnell was the Majority Leader, 61 Senators, including more than 25 Democrats, signed their names in opposition to any efforts that would curtail the filibuster,” a GOP aide recently told Fox News. “Other than the occupant of the White House, and the balance of power in the Senate, what’s changed?”

Republicans, notably, have not actually filibustered a Democrat-backed bill in the current Congress, even as Democrats lament GOP obstruction.

Representatives for Harris did not respond to a request for comment for this story. Her office has previously told Fox News that she is aligned with the president in supporting a “talking filibuster,” in which filibustering senators would be forced to speak incessantly on the Senate floor to prevent a final vote on a bill. 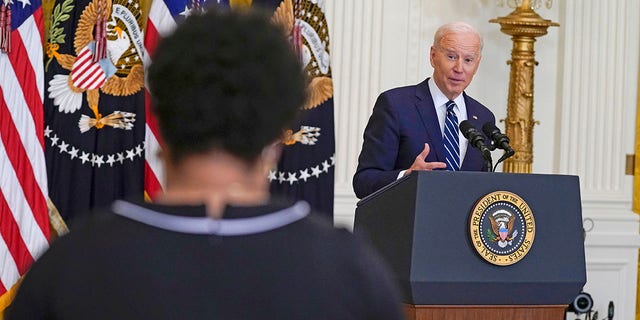 President Joe Biden speaks during a news conference in the East Room of the White House, Thursday, March 25, 2021, in Washington. Biden said that the filibuster is a “relic” of Jim Crow. The filibuster was used to block civil rights legislation, but its origins have nothing to do with the Jim Crow era.   (AP Photo/Evan Vucci)

Republicans have attacked Democrats over their claims that the filibuster is racist.

“If our Democratic colleagues really believe what they’re saying, did they themselves use a racist tool against Sen. Scott’s police reform bill last year?” Senate Minority Leader Mitch McConnell, R-Ky., said this week. “Did they use a racist relic when they delayed the CARES Act or blocked legislation to protect unborn babies who can feel pain?”

The filibuster has technically existed nearly as long as the Senate itself, according to the official Senate website, despite Democrats’ claims it finds its origins in Jim Crow. Senators in the early 1800s would give longwinded speeches aimed at “talking a bill to death,” and the term filibuster emerged by the mid-1800s.

But senators grew tired of having business on the Senate floor gummed up by long speeches and instituted the “cloture” rule, Senate Rule 22, in 1917, which allowed 67 senators to break a filibuster and force a final vote on a bill.

Senators have never been “required” as Biden says, to talk on the floor at length to actually filibuster legislation.

In the years following the new rule in 1917, some senators used the filibuster to block civil rights legislation, which is why Democrats associate it with the Jim Crow era. 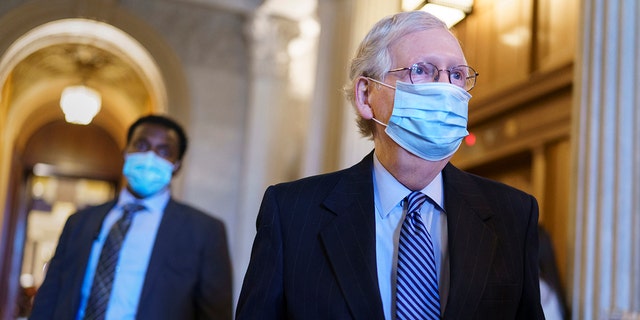 Senate Minority Leader Mitch McConnell, R-Ky., leaves the chamber after criticizing Democrats for wanting to change the filibuster rule, at the Capitol in Washington, Tuesday, March 16, 2021. McConnell has specifically ridiculed the claim by some Democrats that the filibuster is racist, which President Biden adopted on Thursday. (AP Photo/J. Scott Applewhite)

The threshold to break a filibuster was lowered to 60 votes in the 1970s. Also that decade late Senate Majority Leader Robert Byrd, D-W.Va., began the practice of dual-tracking measures so that the Senate could work on one issue while negotiations continued backstage on the bill being filibustered.

But in the following years, senators began using this “phantom” filibuster more regularly to block bills they did not like, which has led to some pushing for filibuster reform, including the elimination of the 60-vote threshold altogether.

Biden, for his part, was asked on Thursday if he believes the filibuster is a Jim Crow relic why he does not push completely for its elimination.

“Successful electoral politics is the art of the possible,” Biden said, noting that he wanted to at least curb “abuse” of the filibuster.

“It’s been abused from the time it came into being by an extreme way in the last 20 years,” Biden said.

If Democrats wanted to establish a new filibuster precedent, they could do so with 51 votes — all 50 senators in the Democratic caucus plus Harris breaking the tie.

For now, they do not have the votes to do it as at least Sens. Joe Manchin, D-W.Va., and Kyrstin Sinema, D-Ariz., have expressed support for keeping the filibuster in its current form.