White House communications director Kate Bedingfield sparred with ABC’s Jonathan Karl on Sunday over a surge in unaccompanied minors trying to cross the U.S. southern border as Bedingfield insisted the numbers “are the same kinds of surges that we’ve seen.”

“We saw spikes in 2014. We saw them in 2019 when the Trump administration had perhaps the cruelest imaginable policies in place, family separation, to try to deter people from coming, and they still came. So this is a cyclical issue. It’s one that President Biden has said is unacceptable to him and he’s working very quickly to address it,” she continued.

“There is something different here, and that is the unaccompanied minors, and we already have a record number of unaccompanied minors in U.S. custody. And in just a single day last week there were 1,000 additional minors who were brought into U.S. custody coming across the border,” he said. “The seasonal surge you’re talking about is only just beginning. … This is not the same as it’s been. This is worse, is it not?” 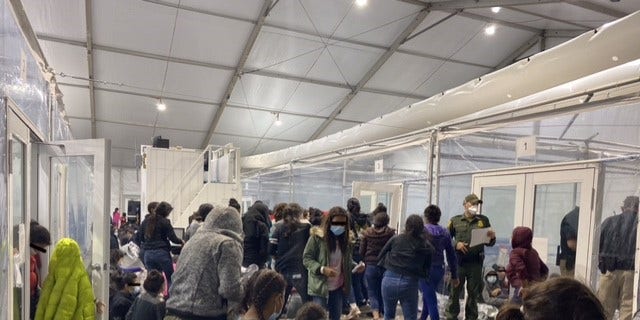 “It is the same. These are the same kinds of surges that we’ve seen,” she said.

She said the administration wants to address the root causes of such migration including a lack of places like Boys & Girls Clubs in northern triangle countries that allow children to have somewhere safe to go.

“Just last week we had a pool camera providing footage to Fox News just last week into the shelters. We want to provide access into the Border Patrol facilities. We are mindful of the fact that we are in the middle of a pandemic. We want to keep these kids safe,” Psaki said. “We are absolutely committed to transparency and providing access to media … and we’re working to get that done as soon as we can.”

“At this point, in allowing access to border patrol facilities for reporters, you are being less transparent than the Trump administration,” host Chris Wallace said.

“The Trump administration was turning away kids at the border and sending them back on the treacherous journey, or they were ripping kids from the arms of their parents. We’re not doing that. We are committed to allowing cameras into the border patrol facilities, absolutely,” Psaki said.

Biden on Thursday appointed Vice President Kamala Harris to lead his administration’s efforts to address a record surge in migrants, including unaccompanied minors, that has strained capacity at immigration facilities at the southern border in recent weeks.

“When she speaks, she speaks for me,” Biden said Thursday.