The Democratic-controlled state of New Jersey is the latest focal point in the national political battle over voting access rules.

Gov. Phil Murphy of New Jersey on Tuesday signs into law a bill that will allow for early in-person voting in the state. The bill sailed through the Garden State’s Senate last Thursday.

The Democratic governor, who is up for reelection this November, will be joined remotely for the signing ceremony by Stacey Abrams. The well-known voting rights activist and organizer from Georgia was instrumental in helping President Biden capture the state in last November’s election and helping the Democrats sweep Georgia‘s twin Senate runoff elections in January, which gave the party the majority in the chamber.

The move by New Jersey to expand voting access comes as some states where the GOP controls the governor’s office and the legislature are passing bills that would tighten voting access rules. Earlier this month Iowa reduced the number of days it will allow for early in-person voting, and last week in Abrams’ home state, Republican Gov. Brian Kemp signed into a law a measure that increased voter ID requirements for absentee voting, reduced the number of ballot drop boxes, and expanded the state legislature’s control over elections. 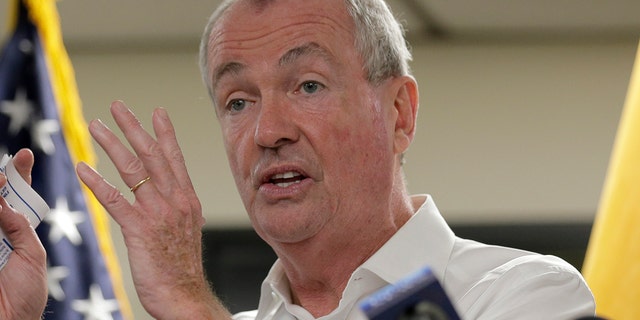 Republicans argue that the tightening of voting access restrictions is needed to improve voter integrity, while Democrats charge it’s an attempt by the GOP to suppress the vote and that the bills in particular target minorities.

“While states across our nation turn back the clock to Jim Crow-era voter suppression laws, New Jersey will expand access to the ballot box,” Murphy charged Monday in a tweet.

REPUBLICANS LAUNCH ‘STOP STACEY’ TO DEFEAT ABRAMS IN GEORGIA IN 2022

With Murphy’s signature on Tuesday, New Jersey will become the 25th state in the nation to allow for early in-person balloting before Election Day, which includes voting on weekends.

While supportive of the move, some county election officials urged that implementation of early voting be delayed until after November’s election, when the governor and the entire state legislature are up for grabs. New Jersey and Virginia are the only states to hold gubernatorial elections in the year after a presidential contest.

Republican state lawmakers also opposed the timeline for implementation, as well as the cost of adding early voting.

The current push by Republicans lawmakers in more than 40 states across the country was ignited by then-President Donald Trump‘s repeated claims ahead of last November’s election that the loosening of restrictions on voting by mail – due to serious health concerns over in-person voting at polling stations amid the coronavirus pandemic – would lead to “massive voter fraud” and “rigged” elections.

After his defeat to now-President Biden, Trump falsely said that the election was “stolen” as he unsuccessfully tried to upend Biden’s victory. Recent polling indicates that election integrity remains a major concern for Republican voters, and that Trump’s sway over such voters remains immense.

Arizona, Florida, Texas and New Hampshire are among the battleground or competitive states where the GOP controls both the executive and legislative branches and where Republican lawmakers are moving forward with efforts to tighten voting access rules.

While the Republican push in the states continues, congressional Democrats are moving forward with a wide-ranging election and campaign finance reform bill.

Democrats said their bill would, among other things, “improve access to the ballot box” by creating automatic voter registration across the country and by ensuring that individuals who have completed felony sentences have their full voting rights restored. The bill would also expand early voting and enhance absentee voting by simplifying voting by mail. The bill, which passed along party lines in the Democratic controlled House, now faces an uncertain future in the Senate, where the Democrats hold a razor-thin majority.

Republicans slam the measure, saying it would lead to a federal government takeover of elections, and accuse Democrats of trying to change election rules to benefit themselves.