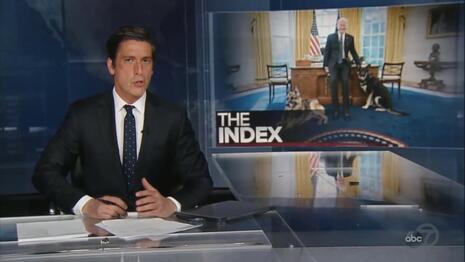 In a Monday afternoon incident at the White House, that didn’t break until Tuesday, President Biden’s 3-year-old German shepherd Major attacked another person after a previous incident earlier in the month. The injuries were so bad they “required medical attention,” according to CNN, but neither CBS Evening News nor NBC Nightly News thought it was newsworthy.

On the other hand, ABC’s World News Tonight sprinted past the story in a 10-second news brief.

“New trouble for one of the dogs at the White House. Major Biden, the 3-year-old German shepherd bit a National Parks Service employee on Monday. The employee’s okay. But it is major’s second incident,” anchor David Muir told viewers in an apparent attempt to downplay what happened.

This second biting incident came after Major had to be removed from the White House and returned to the President’s home in Delaware to receive training. Apparently, the training didn’t help.

According to CNN’s Kate Bennett, on Tuesday, “The Bidens’ dog Major has been involved in another biting incident that required medical attention,” and “The employee was working at the time and needed to stop in order to receive treatment from the White House medical unit.”

Bennett noted that the National Parks Service “did not immediately respond” for comment but the White House was obviously in spin mode:

“Yes, Major nipped someone on a walk. Out of an abundance of caution, the individual was seen by WHMU and then returned to work without injury.”

Bennett also noted that Reuters White House correspondent Jeff Mason had a video of Major on a walk from possibly around the time of the attack. “Major is leashed in the video, something that has not always been the case during other walks by the Biden dogs around the White House when they are with the President and the first lady or White House grounds superintendent Dale Haney,” she added.

Major was also involved in an incident last year at the Bidens’ home in Delaware. Biden says they were playing with a ball when Major caused him to fall and injure his foot. Biden then had to wear a medical boot for a short time.

We could rest assured that if it was former President Trump’s dog that attacked someone on White House grounds, the networks and the rest of the liberal media would be running near-endless reports suggesting the dog was either trained to attack or that the dog was undisciplined because of his owner.

And it wouldn’t be below them to advocate for the dog to be legally labeled a “dangerous dog” and put down in accordance to Washington, D.C. law.

This blackout and downplaying of President Biden’s dog biting another person was made possible because of lucrative sponsorships from  Allstate on ABC, and Liberty Mutual on both CBS and NBC. Their contact information is linked so you can tell them about the biased news they fund.

The transcript is below:

DAVID MUIR: New trouble for one of the dogs at the White House. Major Biden, the 3-year-old German shepherd bit a National Parks Service employee on Monday. The employee’s okay. But it is major’s second incident.